SKU:
ND1423A
UPC:
ITEM TYPE:
Powder
QUANTITY:
10g
SERVINGS PER BOTTLE:
100 Servings
INDICATIONS:
Mood, Memory, & 5-HT2A Activation
ACTIVE INGREDIENTS:
Bacopa monnieri Extract
INACTIVE INGREDIENTS:
Rice Flour, Magnesium Stearate, and Vegetable Cellulose
SUGGESTED USE:
As a dietary supplement, take one Cognance Enhanced Bacopa capsule daily.
STORAGE:
Store in a cool and dry place. Keep away from direct sunlight and heat.
WARNING:
Keep out of reach of children. Do not take this or any other supplement if under the age of 18, pregnant or nursing a baby, or if you have any known or suspected medical conditions, and/or taking prescription drugs or over the counter medications.
DISCLAIMER:
Always consult with a qualified health physician before taking any new dietary supplement. This product is not intended to diagnose, treat, cure, or prevent any diseases. These statements have not been evaluated by the Food and Drug Administration.

Why Should I Take Cognance?

Over the years, the concept of microdosing has really taken off; yet for the average person, it is quite an inaccessible concept to partake in (for now). Although the legislative environment is changing, wide spread microdosing accessibility is still a ways off. Luckily, we had the foresight many years ago to look towards one of the most famous natural nootropics, Bacopa monnieri. It contains the precursor for a fantastic molecule called ebelin lactone, which just so happens to be a positive allosteric modulator of one of the main receptor targets of microdosing: 5-HT2A! Through a patented extraction and processing method, we were able to, for the first time ever, concentrate massive amounts of ebelin lactone! This has never been done before, so you are among the first to try out this unique molecule! Ebelin lactone is perhaps one of the only high affinity natural 5-HT2A positive allosteric modulators. The effects you can expect from Cognance are a distinct mood boosting effect, backed up by increases in overall cognitive function, focus, and even creativity! This is, of course, not all down to 5-HT2A receptor activation. In fact, Cognance has another special trick up its sleeve. The ebelin lactone content of Cognance also acts as an M1 muscarinic acetylcholine receptor positive allosteric modulator. This is quite an important and seemingly elusive target for cognitive enhancement, and thus it is quite special to see it here alongside ebelin lactone’s 5-HT2A activity!

Cognance is an incredibly unique patented extract of Bacopa monnieri. First, we create a very potent bacoside extract, similar to our bacopa 24% bacosides product, but even more potent. We then put this extract through a two stage hydrolysis process, which mimics the natural metabolism of bacopa extracts in the human body. The first hydrolysis stage turns the various bacosides into two main compounds, jujubogenin and pseudojujubogenin. These compounds then undergo a second acid hydrolysis, which converts the jujubogenin into ebelin lactone and pseudojujubogenin into Bacogenin A1. By perfecting this process, we have been able to consistently obtain ebelin lactone concentrations in excess of 10%, which is a massive achievement!

What we end up with at the end of the patented extraction process, is a bacopa extract that has been “pre-metabolized”. This means you don’t have to rely on your body to metabolize the bacosides in bacopa. This has some major advantages! First and foremost, the bacosides like bacoside A3, bacopaside C, bacopaside II and bacopaside X do not absorb very readily, if at all. Let’s take a look at why this is the case: 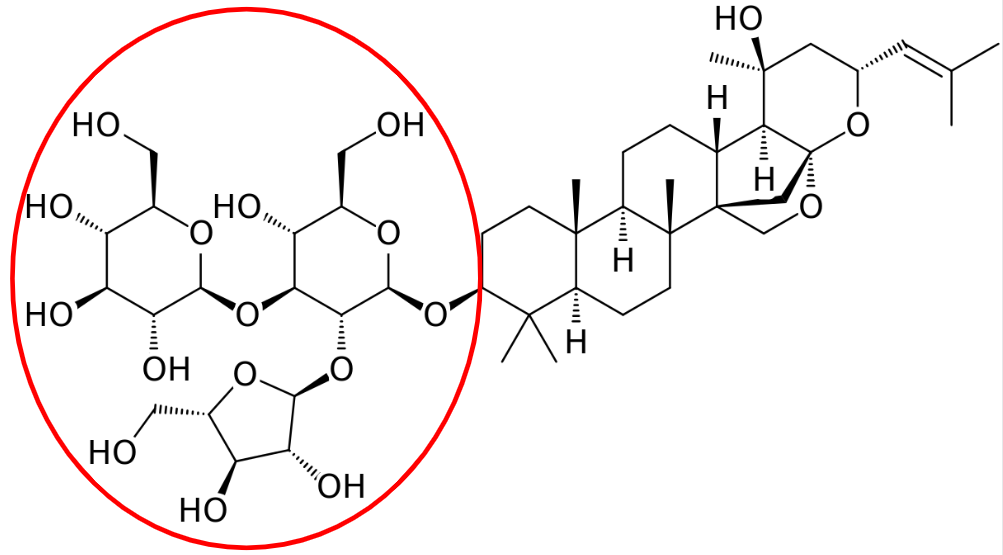 Figure 1: The molecular structure of bacoside A3. Sugar groups are circled in red.

The bacosides have very bulky sugar groups hanging off of it. This increases the molecular weight of the molecule quite a bit, and when combined with its sheer size, this makes it very hard for the bacosides to be absorbed. The molecular weight limit for most bioavailable compounds (as determined by Christopher A. Lipinski) is 500 g/mol, but bacoside A3 (as pictured above in Figure 1.) clocks in at a whopping 929.10 g/mol. This is almost double the Lipinski rule of 5 limit of 500 g/mol!

Removing these sugar groups is not particularly difficult, and with a bit of effort, the sugar groups are ripped off in our digestive tract during the initial hydrolysis process. This then yields jujubogenin with a molecular weight of 472.7 g/mol, right under the 500 g/mol limit according to the Lipinksi rule of 5! Unsurprisingly, jujubogenin now all of a sudden absorbs fairly well and even makes it past the blood brain barrier (BBB). The same can be said for pseudojujubogenin, which without the bulky sugar groups, now also has a molecular weight of 472.7 g/mol, and is fairly bioavailable.

During the first stage of R&D on this extraction process, we purposefully cut the hydrolysis process off at the point where there was a lot of jujubogenin and pseudojujubogenin present. We then bioassayed this extract and it felt characteristically like regular Bacopa monnieri, just a lot more potent and quicker acting. The calming and for some individuals, lethargy inducing effects, were there in spades. Due to already having ripped off the sugar groups outside of the body, the extract got to work a lot faster. However, we had our sights set on scrubbing these calming/lethargy effects out, and for that we had to push the hydrolysis process along quite a bit more!

In the secondary hydrolysis process, we are mimicking the low pH environment of the stomach, using the low pH to drive the secondary hydrolysis process which converts jujubogenin to our target compound, ebelin lactone! This is where some more complex chemical changes take place, as can be seen in our proposed multi-step acid hydrolysation process as drawn out by our lab director:

While the first hydrolysation step (bacosides to pseudojujubogenin & jujubogenin) is likely to occur fairly efficiently in the digestive tract, this secondary acid catalyzed hydrolysis step is a whole lot less likely to result in efficient conversion in the digestive system. Due to this, it is unlikely we are consistently converting high amounts of bacosides to ebelin lactone. This is a shame, because the chemical changes that lead to ebelin lactone, also lead to drastically enhanced bioavailability and BBB permeability! In addition to this, ebelin lactone is a 5-HT2A and muscarinic acetylcholine M1 receptor positive allosteric modulator, and according to data appears to lack GABAergic effects. This is what led us to the conclusion that concentrating high amounts of ebelin lactone would scrub the lethargy inducing effects, and in fact lead to a more uplifting and even stimulating bacopa extract. We weren’t wrong! When we produced the second fully converted R&D batch, we discovered that during beta-testing a lot of long-time bacopa users around the office were no longer able to identify it as bacopa. Cognance is completely different, very clean, unique and totally lacking any sort of lethargy. This truly is bacopa reimagined!

Now that you know the ins and outs of the extraction and conversion process, you are probably wondering what a high ebelin lactone bacopa extract feels like. For those who have experience with real microdosing (genuine sub-threshold effects), the effects will be recognizable, and subtle! Subtle is the name of the game here,. Cognance is not going to blow you away and send you on a spiritual journey. That is not the intent of microdosing, and it is not the intent of Cognance. However, what it will provide is a very unique sense of mental clarity, focus, and creativity paired with a very natural feeling lift in mood. These acute effects are perceptible by most when utilizing the standard 100 mg dose. However, if you want less subtle and more noticeable effects, you can bump up your dosage to 200 mg. What we are targeting here is predominantly the 5-HT2A receptors, so let’s talk about those a little more!

The 5-HT2A receptor is one of the 15 known serotonin receptors, and plays a major role in regulating the CNS, neuroplasticity, mood, creativity and focus. The 5-HT2A receptors are particularly densely distributed throughout regions of the brain that are heavily involved in cognition and mood. Thus, it is no surprise that 5-HT2A receptor dysfunction has been identified as a common thread amongst individuals with less than ideal cognitive function and mood. When 5-HT2A receptors are activated, highly complex signaling cascades occur that then end up influencing glutamatergic, cholinergic, GABAergic and even dopaminergic activity. It also forms receptor complexes (heterodimers & heteromers) with dopamine D2, cannabinoid CB1, glutamate mGluR2 and serotonin 5-HT1A. These complex reactions with other neurotransmitter systems certainly makes 5-HT2A a very important and far reaching neuromodulator, which has major implications for both cognition and mood. No wonder 5-HT2A has become such a legendary, although somewhat enigmatic, receptor target! This is why we were so excited to have found ebelin lactone, and even more excited when we figured out a clever method of producing production amounts of it! By taking Cognance, you can experience many of the beneficial effects of elevated 5-HT2A activity, such as elevated mental clarity, a lift in mood and deep calm focus!

However, while 5-HT2A is an incredibly exciting receptor target, M1 muscarinic acetylcholine receptors are just as fascinating. However, they are less talked about, and certainly underappreciated! Similar to 5-HT2A, M1 is also a G-protein coupled receptor, and both 5-HT2A and M1 use very similar signaling proteins. It is then perhaps not surprising that M1 and 5-HT2A receptors have many overlapping effects when it comes to cognitive function. A lot of research has started to point to M1 receptors being one of the main cholinergic receptors involved in cognitive function. Due to this, there has been a major effort to find selective M1 agonists; or even better, positive allosteric modulators. This effort has turned out to be incredibly hard, so it is quite spectacular that nature has given us a compound which just so happens to be a selective positive allosteric modulator of M1.

The M1 positive allosteric modulation effects, combined with the 5-HT2A positive allosteric modulation effects, gives Cognance an incredibly unique, yet very clean nootropic effect. We believe that this is a new chapter in the nootropic scene, and we hope that this process has illustrated that nature harnesses some of the most profound neuromodulators on the planet! Of course, sometimes requiring clever human intervention to liberate these fantastic molecules! We have achieved that with Cognance, and look forward to working alongside nature again to develop a full series of cutting edge herbal extracts.

Cognance produces robust cognitive enhancement effects that stack particularly well on top of the foundation that OmegaTAU can lay. Together, you get a very full fledged natural nootropic stack that will help you take on cognitively demanding tasks!

One of our favorite aspects of Cognance is its ability to lift mood. We find that the mood lifting effects go particularly well with the serotonergic effects of saffron. Together, they produce a very uplifting sense of well being, giving you a pleasant and smooth pep in your step!

Another direction you can take Cognance in, is relaxation! We find that Cognance gives a very pleasant boost to the calming effects of our supercritical coriander extract. This stack helps enhance mood, while also helping to promote a very relaxed sense of focus. Perfect for some meditation or a yoga session!

Cognance does a great job of dialing in focus, yet it is not particularly energizing. We find that the enhanced dopaminergic activity that sabroxy provides however, adds a very synergistic energizing effect! In addition to this, the enhanced dopaminergic activity in concert with the 5-HT2A positive allosteric modulation effects, brings forth a very keen sense of mental clarity!

As a dietary supplement, take 100mg of Cognance daily.

To gain more insight, see the Cognance reviews and experiences below.

Nootropics Depot offers a 10g jar of high-quality Cognance. Nootropics Depot’s Cognance has been lab-tested and verified for both product purity and identity.