SKU:
ND1085A
UPC:
ACTIVE INGREDIENT:
Chaga Mushroom Extract
ITEM TYPE:
Powder
QUANTITY PER BOTTLE:
30g or 60g
SERVINGS PER BOTTLE:
60 Servings or 120 Servings
STANDARDIZATION:
Minimum 8% Beta-Glucan Content
SUGGESTED USE:
As a dietary supplement, take 500mg of Chaga Mushroom Extract 1-2 times daily.
STORAGE:
Store in a cool and dry place. Keep away from direct sunlight and heat.
WARNING:
Keep out of reach of children. Do not take this or any other supplement if under the age of 18, pregnant or nursing a baby, or if you have any known or suspected medical conditions, and/or taking prescription drugs or over the counter medications.
DISCLAIMER:
Always consult with a qualified health physician before taking any new dietary supplement. This product is not intended to diagnose, treat, cure, or prevent any diseases. These statements have not been evaluated by the Food and Drug Administration.
SCOOPS:
This product does not include a scoop. Transfer scoops are not an accurate form of measurement. A milligram scale is needed to accurately measure this product.

What is Chaga Mushroom Extract?

Inonotus obliquus, more commonly known as chaga mushroom (a Latinisation of the Russian term 'чага'), is a fungus in the family Hymenochaetaceae. It’s known to be grown primarily on birch trees in cold climates, such as Siberia, Russia, Korea, Northern Canada, Northern Europe, and Alaska. Chaga mushroom is a fungus that produces a woody growth, called a conk, which has been used in various practices and has several purported chaga benefits. Chaga is also known by names like chaga inonotus obliquus, clinker polypore, and sterile conk. The Chaga mushroom is irregularly formed and has the outer appearance of burnt charcoal, due to massive amounts of melanin, while the inside of the chaga mushroom is orange in color. 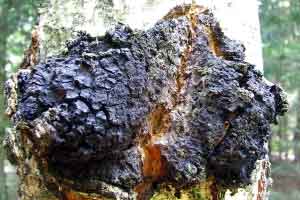 Chaga mushroom (Inonotus obliquus) grows in birch forests of Russia, Korea, Eastern and Northern Europe, northern areas of the United States, in the North Carolina mountains and in Canada. Chaga mushroom has been used as a folk remedy in Russia and other North-European countries for centuries.

Many people believe that supplementation of chaga mushroom could produce a myriad of chaga benefits. Due to the bitter taste of raw chaga mushroom, traditional practices involve making a chaga tea or chaga tincture to take advantage of the chaga health benefits without having to endure the bitter and harsh taste of the inonotus obliquus mushroom. In fact, this practice is still popular today. Many people have shared chaga tea recipes and different ways on how to make chaga tea and even chaga coffee online. So what is chaga good for?

Chaga fungus is rich in fiber and other essential nutrients, such as iron, vitamin D, potassium, magnesium, manganese and calcium. Some believe these nutrients may play a role in various chaga health benefits. Chaga also has a high melanin content which has led to the belief that Chaga mushroom can boost the natural melanin content found in the skin, thereby promoting skin health and protection from the sun. Chaga also carries properties that may promote healthy inflammation levels as well. Melanin is also believed to potentially support healthy oxidation processes. Anecdotal evidence supports Chaga uses for cardiovascular, immune, and cellular benefits but further studies are still being conducted to further verify these claims.

To learn more, read the Chaga mushroom reviews and experiences below.

Where to Buy Chaga Mushroom Extract?