SKU:
ND1067A
UPC:
ACTIVE INGREDIENT:
Green Tea Extract
ITEM TYPE:
Powder
QUANTITY PER BOTTLE:
125g or 250g
SERVINGS PER BOTTLE:
250 Servings or 500 Servings
STANDARDIZATION:
Minimum 45% EGCG Content
SUGGESTED USE:
As a dietary supplement, take 500mg of Green Tea Extract once daily.
STORAGE:
Store in a cool and dry place. Keep away from direct sunlight and heat.
WARNING:
Keep out of reach of children. Do not take this or any other supplement if under the age of 18, pregnant or nursing a baby, or if you have any known or suspected medical conditions, and/or taking prescription drugs or over the counter medications.
DISCLAIMER:
Always consult with a qualified health physician before taking any new dietary supplement. This product is not intended to diagnose, treat, cure, or prevent any diseases. These statements have not been evaluated by the Food and Drug Administration.

What is Green Tea Extract?

Green Tea Extract, made from the Camellia sinensis plant, has a history of use in a number of Asian countries; though its very first use originated in traditional Chinese use. Green Tea is actually made from the same leaves used to make oolong tea, white tea and black tea. The difference, however, is that the Camellia sinensis leaves used to make Green Tea Extract have not undergone the same withering and oxidation process as its counterparts.

Green Tea Extract has become a popular oxidative support supplement with a number of reported health benefits believed to be obtained via its polyphenols (also known as catechins).

Green Tea Extract benefits and uses may include:

Made from the Camellia sinensis plant, there are a number of reported Green Tea Extract benefits. The polyphenols and catechins have been shown to induce thermogenesis which in turn may helps regulate body fat levels and metabolism. Other evidence has suggested Green Tea Extract has oxidative support and immune-boosting properties. It may also support cardiovascular health.

If the Green Tea consumed contains enough caffeine, it may also be used as a natural coffee alternative. It's important to note, however, that Green Tea Extracts that contain high EGCG content typically have very little caffeine in them.

What Are Green Tea Extract Catechins And Why Are They Important?

Green Tea catechins are made up of the four molecules listed below, the most potent of which is believed to be EGCG (Epigallocatechin Gallate). Epicatechin and Epigallocatechin, pictured below, can become acylated with gallic acid to form gallates. The best Green Tea Extract supplements available to buy usually specify their catechin and/or EGCG content. Without that information available, it is difficult to know if a particular Green Tea Extract supplement has high EGCG content or is simply ground up or powdered tea leaves. 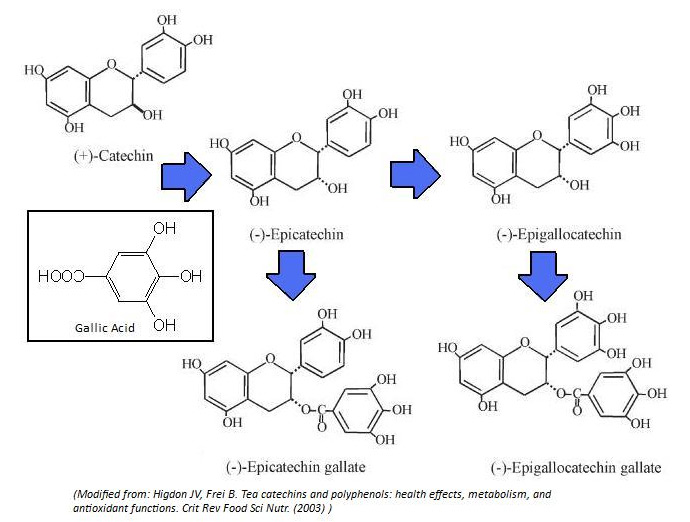 Does Green Tea Extract have Caffeine?

While its reported that one brewed cup of Green Tea may contain anywhere from 35-100mg of Caffeine, the amount of caffeine in a concentrated Green Tea Extract can vary quite a bit. In fact, Green Tea Extracts that have high EGCG content, such as Nootropics Depot's Minimum 45% EGCG extract, tend to actually have very trace amounts of caffeine in them.

How Much EGCG is in Green Tea Extract?

As a dietary supplement, take 500mg of Green Tea Extract once daily.

Where to Buy Green Tea Extract Standardized to EGCG Content

To gain more insight, read the Green Tea Extract reviews and experiences below.