SKU:
ND1195A
UPC:
ACTIVE INGREDIENT:
Poria Extract (Wolfiporia extensa)
ITEM TYPE:
Capsules
QUANTITY PER BOTTLE:
60ct. or 180ct.
SERVINGS PER BOTTLE:
60 Servings or 180 Servings
STANDARDIZATION:
Beta-Glucan (β-Glucan) minimum content: 55%
SUGGESTED USE:
As a dietary supplement, take one 500mg Poria Mushroom Extract Capsule 1-2 times daily.
STORAGE:
Store in a cool and dry place. Keep away from direct sunlight and heat.
WARNING:
Keep out of reach of children. Do not take this or any other supplement if under the age of 18, pregnant or nursing a baby, or if you have any known or suspected medical conditions, and/or taking prescription drugs or over the counter medications.
DISCLAIMER:
Always consult with a qualified health physician before taking any new dietary supplement. This product is not intended to diagnose, treat, cure, or prevent any diseases. These statements have not been evaluated by the Food and Drug Administration.

What are Poria Mushroom Capsules?

Wolfiporia extensa is a source of a triterpenoid compound known as pachymic acid. Pachymic acid has been the object of scientific study based upon the mushroom's role in traditional Chinese usage. Pachymic acid has shown promise in supporting healthy cellular function. Modern science additionally found Poria cocos mushroom to be rich in beta glucans and triterpenoids, a class of compounds that may help promote healthy levels of oxidation. The popularity in Traditional Chinese practices has spurred research into investigating more Poria mushroom benefits. Small scale studies were able to see correlation with wolfiporia extensa supplementation and these Poria benefits. Some results were convincing enough to warrant further advanced research. 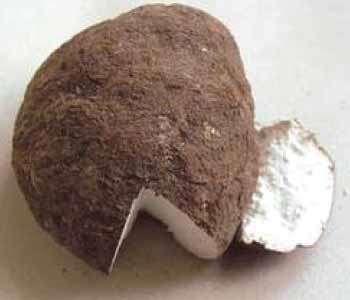 Poria cocos mushroom carries a large amount of bioactive compounds like a collection of monosaccharides, triterpene derivatives, and several unique amino acids. These compounds work in tandem with one another to produce a diverse profile of Poria cocos benefits that promote whole body health with a focus on nootropic effects that may help promote brain health and cognitive function.

Traditional Chinese practices used Poria extensively in combination with other natural compounds. One of the more common pairings with Poria mushroom extract is Polygala Tenuifolia. This combination was used in Traditional Chinese practices with the sole purpose of promoting cognitive function. Scientific research suggests that Poria mushroom extract may help support cerebral blood flow. This improved blood flow supports memory formation and promote levels of acetylcholine! Among their benefits, Polygala and Poria cocos benefits  have cognitive promoting effects on their own, however, Many people report that Poria and Polygala have a synergistic relationship with each other, enhancing each other’s effects.

To learn more, read the Poria mushroom reviews and experiences below.

Where to Buy Poria Mushroom Capsules?