SKU:
ND1302
UPC:
ACTIVE INGREDIENT:
Accelon Omega 3 Fish Oil
FISH SOURCE:
Engraulis encrasicolus (Anchovy)
HARVESTING LOCATION:
Coast of Norway
PROCESSED IN:
Sandefjord, Norway
FORM:
Ethyl Ester in SMEDS Delivery System
CERTIFICATIONS:
Friend of the Sea Verified
STABILIZING AGENTS:
Tocopherols, Ascorbyl Palmitate
ITEM TYPE:
Softgels
QUANTITY PER BOTTLE:
30ct. or 90ct.
SERVINGS PER BOTTLE:
30 Servings or 90 Servings
SUGGESTED USE:
As a dietary supplement, take one Accelon Omega 3 softgel daily.
STORAGE:
Store in a cool and dry place. Keep away from direct sunlight and heat.
JAR MATERIAL / COLOR::
In an effort to use more appropriate materials for certain products, we will be phasing in different bottles that contain HDPE vs PET. As we make this transition you may receive a bottle that is different in color and material than that pictured.
WARNING:
Keep out of reach of children. Do not take this or any other supplement if under the age of 18, pregnant or nursing a baby, or if you have any known or suspected medical conditions, and/or taking prescription drugs or over the counter medications.
DISCLAIMER:
Always consult with a qualified health physician before taking any new dietary supplement. This product is not intended to diagnose, treat, cure, or prevent any diseases. These statements have not been evaluated by the Food and Drug Administration.

Friend of the Sea Verified 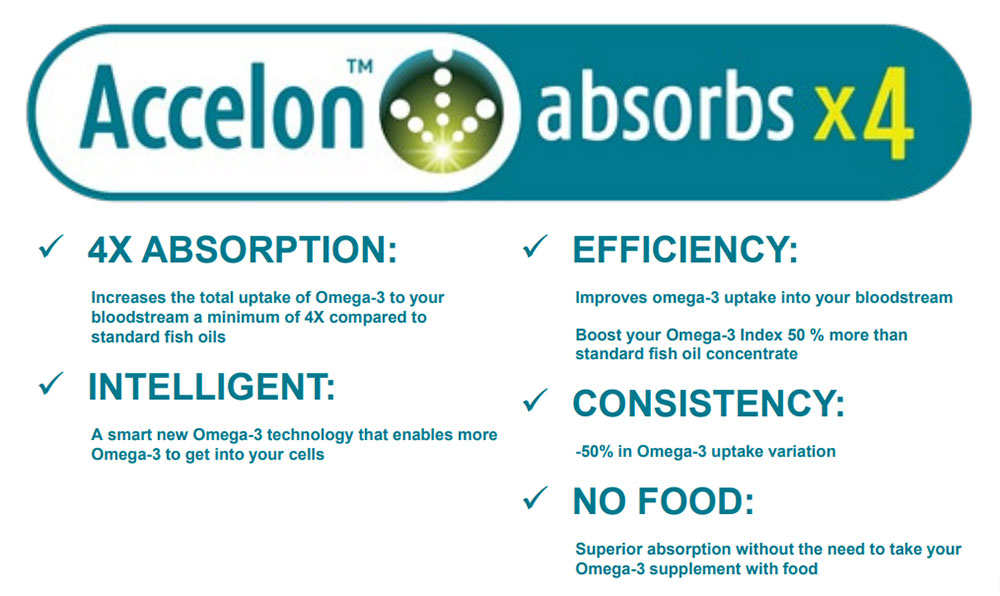 Omega 3s play significant roles in our body as they help support the structure of cell membranes and promote cardiovascular, cognitive, and even respiratory function. Consuming Omega 3s has also been largely associated with supporting cardiovascular and metabolic operation. However, getting your necessary Omega 3s from food like fish can be a bit of a challenge. The Omega 3 content of fish and other Omega 3 foods can vary widely. The Omega 3 content of fish also depends on the type and quality of food that the fish consumes which can greatly affect the degree of Omega 3 benefits you enjoy. Research conducted over the last 15 years has revealed that EPA and DHA Omega 3 content in farm-raised fish has declined substantially due to changes to the ingredients in the fish feed along with other ingredients.

Typically, taking over the counter Omega 3 supplements would be a nice alternative to food-based Omega 3 sources. However, Omega 3 supplements need to be taken with a fatty meal to even begin to be properly absorbed. Yet, many people prefer to take supplements without food or fat-based meals. Accelon Omega 3 changes the game with their advanced Omega 3 absorption technology, so you can enjoy the array of Omega 3 health benefits at any time of the day! 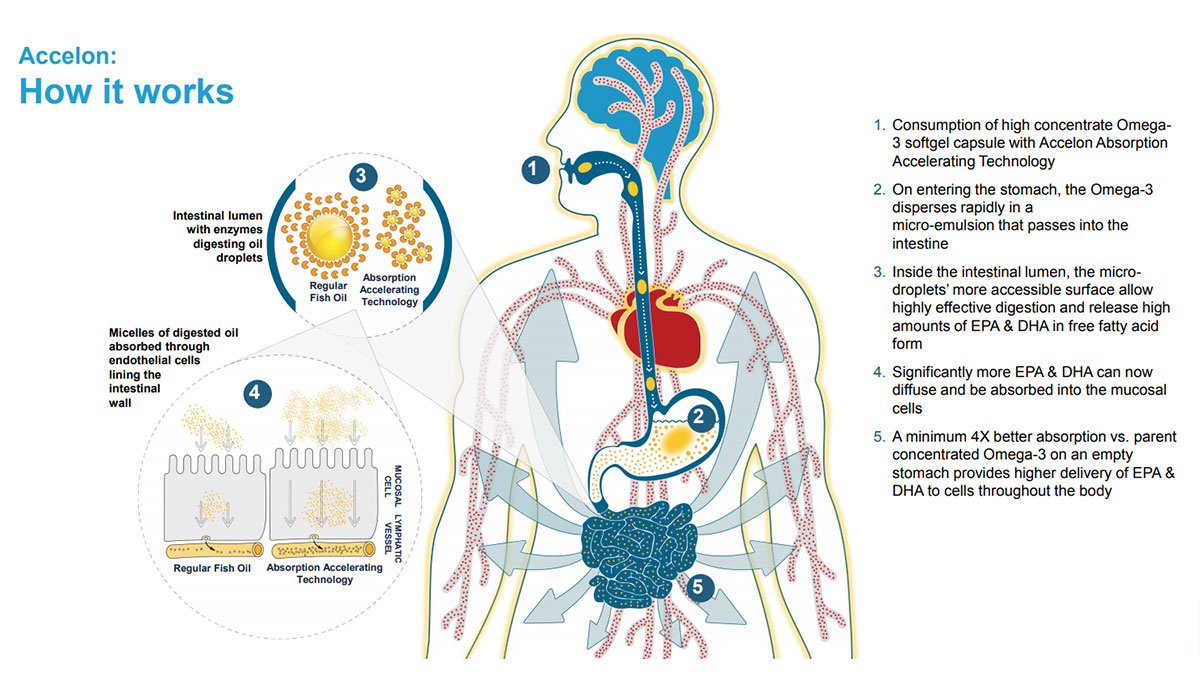 Accelon™ is the Omega 3 ingredient brand setting the global standard for superior Omega 3 absorption. The science behind Accelon™ is a breakthrough Omega 3 absorption accelerating technology; targeting the absorption of EPA and DHA at a cellular level. Upon entering the stomach, Accelon™ uniquely causes Omega 3 to disperse rapidly in a micro-emulsion that passes into the intestine. Inside the intestinal lumen, the micro-droplets’ more accessible surface promotes highly effective digestion and releases high amounts of EPA and DHA in free fatty acid form. Significantly more EPA and DHA can now diffuse and be absorbed through the mucosal cells layer and subsequently released into the body’s circulation. That means Accelon™​ accelerates Omega 3 absorption, so you can enjoy more Omega 3 benefits! Accelon™ provides a minimum of 4X Omega 3 absorption compared to market-leading high concentrate Omega 3 supplements. Independent clinical trials have shown that Accelon™ delivers a minimum of 4X better absorption of Omega 3 on an empty stomach in comparison to other market-leading high concentrate Omega 3 products, which means a higher delivery of EPA and DHA to cells throughout the body. Typically, people take Omega 3 supplements with food, so this requirement is no longer needed, meaning getting your daily DHA and EPA has never been easier and more convenient! Even if taken with food, Accelon™ absorption is still more than 30% greater than with other Omega 3s. Making Accelon Omega 3 one of the best Omega 3 supplements on the market for optimizing absorption!

This pair is a potent and bioavailable stack for effectively promoting overall joint function!

Enjoy this simple yet focused approach to supporting cardiovascular function. You may also enjoy additional benefits to inflammation and oxidation levels!

This combination is a well-rounded and effective way to promote cognitive function without being overly stimulating.

This stack promotes functional support of immune system function. You may also enjoy benefits to metabolic function from this stack!

As a dietary supplement, take one Accelon Omega 3 softgel daily.

For more insight, read the Accelon Omega 3 reviews and experiences below.

Where to Buy Accelon Omega 3