Whether you’re just starting to dip your toes into nootropics, or have already taken the full plunge, fish oil is going to provide a very solid base to build a nootropics stack upon. This is because a significant portion of our brain is composed of fatty acids; in particular omega-3 polyunsaturated fatty acids (ω-3 PUFA). The most abundant ω-3 PUFAs in the brain are docosahexaenoic acid (DHA), eicosapentaenoic acid (EPA) and arachidonic acid (AA) which all play very diverse neurological roles. Luckily enough, fish oil is loaded with DHA and EPA, and is thus a great substance to support congitive function. Apart from its neurological benefits, fish oil also produces a host of positive effects on various biological systems throughout the body.

These effects include but are not limited to:

While this a very impressive list of effects, keep in mind that fish oil is mainly going to exert a supportive role, rather than providing a direct stand-alone enhancement. That being said, fish oil is fantastic for supporting the healthy functioning of our bodies and brains.

Why Take A Fish Oil Supplement Instead of Just Eating Fish?

There is one important question that we need to answer before diving into this article. Why supplement fish oil when I can just eat fish? There are a couple of answers to this question, with the most obvious answer being convenience and cost. It is much easier, cost effective, and calorie friendly to simply swallow a purified fish oil capsule rather than having to prepare and eat fish. For example, one capsule of triple strength fish oil clocks in at 9 calories, 750 mg of ω-3 PUFAs and 0.25 USD. Of this 750 mg: 325 mg is EPA, 325 mg is DHA and the remaining 100 mg is composed of unspecified ω-3 PUFAs. In terms of DHA this is equivalent to about 140 grams of light canned tuna (162 calories) and in terms of EPA, a whopping 690 grams of light canned tuna (800 calories). In terms of pricing, assuming an average cost of 0.25 USD per ounce of light canned tuna, the DHA equivalent would cost 1.23 USD and the EPA equivalent would cost 6.08 USD. However, the real cost of regularly eating canned light tuna extends much further than its financial and caloric cost. Since tuna is a large predatory fish, it tends to bioaccumulate various compounds, the most concerning of which is methylmercury, a potent neurotoxin. According to ‘Got Mercury?’ our canned light tuna EPA equivalent dose would put us well above the daily allowable methylmercury intake set by the US Environmental Protection Agency. The  triple strength purified fish oil capsule on the other hand is lab tested for methylmercury, and is guaranteed to be well below the daily allowable methylmercury intake. To summarize, without taking into account the nutritional value of fish and solely focusing on DHA and EPA content, the triple strength purified fish oil is the clear winner; cheap, convenient and no risk of methylmercury poisoning. 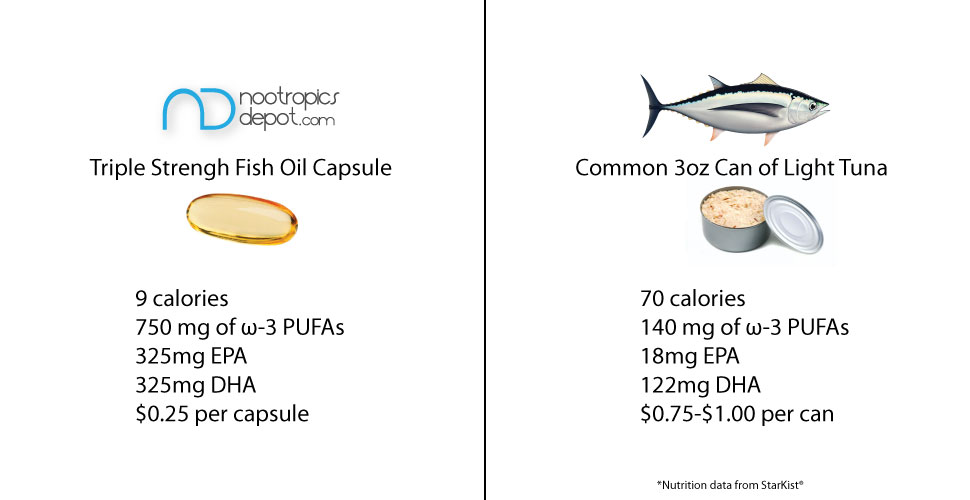 DHA and EPA in Fish Oil and Krill Oil Supplemenets

Now that we have the basics out of the way, lets start to add in some more variables. DHA and EPA in fish oil are present in a few different forms. In nature most DHA and EPA are bound in triacylglycerides (TAG) whereas in isolated fish oil capsule most EPA and DHA is bound in ethyl esters (EE) or re-esterified TAG (rTAG). In general it appears that rTAG is slightly more bioavailable than TAG and EE. Furthermore, DHA and EPA can also be bound in phospholipids (PL). It appears that PL fish oil, which is generally extracted from  krill, is significantly more bioavailable than TAG, rTAG and EE fish oil. In addition to PL fish oil having greater bioavailability, the phospholipids in PL fish oil produce unique effects that are not seen with TAG, rTAG and EE fish oils, but we’ll get into that a little further in to the article.

We’ve now formed a basic understanding of what fish oil is, so now it’s time to explore what it actually does. As discussed fairly briefly earlier in the article, fish oil has a supportive role in many biological systems throughout the body. This has been attributed to its ability to support healthy inflammatory responses (DHA in particular). It supports healthy inflammatory responses directly by inhibiting nuclear factor kappa B (NF-κB), which is a very important mediator of cytokines. NF-κB is also particularly sensitive to oxidative stress; this is because NF-κB is normally bound to an inhibitory protein called IκB, which is degraded by oxidative stress. DHA increases levels of glutathione, and thus regulates NF-κB activation by regulating the degradation of IκB. DHA also activates peroxisome proliferator activated receptor (PPAR‐γ), activation of which directly decreases the induction of cytokines whilst also interrupting NF-κB activation. Furthermore, a significant portion of our brain cells but also other cells throughout our bodies are made up of DHA. The DHA in these cells is bound to phospholipids, which get degraded during tissue stress. This causes a release of free DHA. DHA is subsequently oxidised to resolvins and protectins. Resolvins downregulate NF-κB expression and protectins regulate IL-1β mediated stimulation of the enzyme cyclooxygenase (COX)(Bradbury, 2011). Healthy inflammatory responses are the underlying mechanism for most of the positive effects associated with fish oil listed earlier in the article, since a lot of biological functions are mediated by inflammatory and oxidative mechanisms. 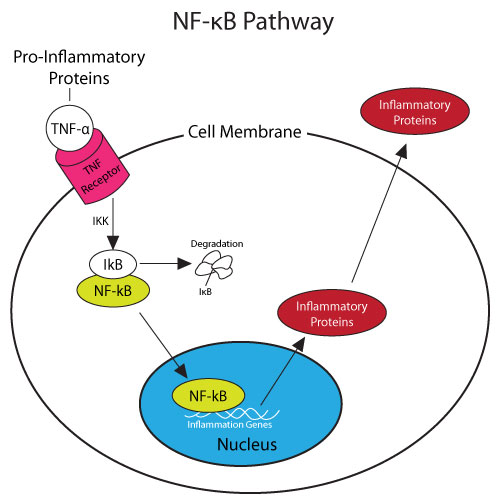 DHA In The Brain

We briefly mentioned above that DHA is released from phospholipids during periods of oxidative stress. This is a very important mechanism because oxidative stress is directly correlated to metabolic activity. Therefore, it is no surprise that DHA concentrations are highest in areas of the body that are very metabolically active; in particular the brain which uses an enormous amount of energy relative to its size (2.3% of bodyweight, 23% of total energy consumption). In the brain, DHA concentrations are highest in grey matter, which is the most metabolically active tissue in the brain. During oxidative stress in the brain, DHA is released from phospholipids and converted to neuroprotectin, which can regenerate nerves, support oxidative stress induced apoptosis and support oxidative stress. In addition to this, during activation of neurons small amounts of DHA are released into the cytosol of the cell; most of which is rapidly reincorporated into the cell, but a small portion can be converted to neuroprotectin (Green et al., 2008). In addition to this, higher brain DHA levels are correlated with higher BDNF levels. BDNF is incredibly important for the maintenance of neuroplasticity and has various potential neuroprotective benefits throughout the brain. DHA also appears to be a major component of vesicles, which are structures within the neuron that are filled with neurotransmitters, and thus an adequate amount of vesicles is needed for cognitive functioning. In particular DHA levels appear to directly influence vesicle density in an area of the brain called the hippocampus, a crucial hub for memory and proper cognitive functioning. 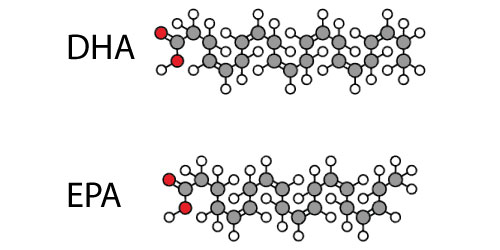 EPA In The Brain 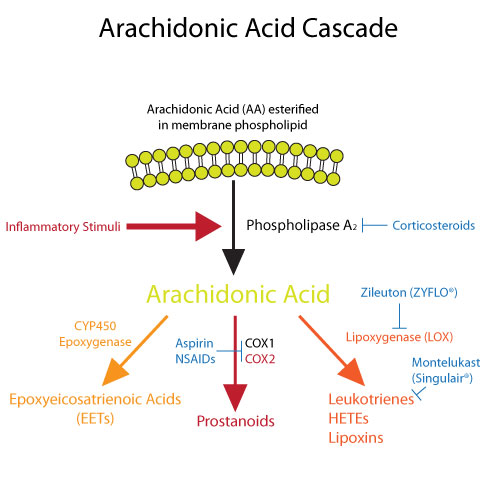 How Do I Know What The Best Krill Oil or Fish Oil Supplement Is For Me?

To summarize fish oils main benefits are due to its DHA and EPA content which both play a role in our bodies healthy inflammatory response and support of cognitive function. DHA is a major component of the cells in our bodies and it could be said that DHA is the most important for younger individuals since increased DHA consumption could lead to enhanced cognitive functioning. On the other hand an EPA deficiency seems much more likely and appears to have some serious consequences, EPA consumption would likely be more suited to older individuals whom are interested in supporting cognitive functioning.

So, based on this information what fish oil do you choose? We offer a  triple strength fish oil, which contains equal amount of EPA and DHA; this would be a fantastic choice for somebody looking to support their overall health. We also offer a  70% DHA fish oil, which would be a great choice for younger individuals whom are interested in promoting the DHA content, since increased DHA content in the brain could potentially support cognitive functioning. We also offer a  krill oil, which as mentioned earlier contains EPA and DHA, which is already bound in phospholipids. This increases the bioavailability of EPA and DHA but also appears to support stress management and cognition promoting activity, which could potentially be due to the phospholipid content. Based on this, krill oil would be a good choice for an individual looking to use fish oil for its stress support and cognition promoting activity. We also have a  blend of krill oil and wild Alaskan salmon oil, which boasts many of the same benefits as krill oil with the added benefit of containing more DHA, vitamin D and 8 other essential fatty acids.

ULTIMATE GUIDE TO NOOTROPICS | PART 3 | GETTING TO KNOW MUSHROOM EXTRACTS