What is Milk Thistle?

Milk thistle, or Silybum marianum, is a plant which grows all over the world. However, it was initially believed to be native to the southeast coast of England. From its native habitat it spread widely throughout the world, and is often considered an invasive weed. The use of milk thistle can be traced back all the way to ancient Greece and the Roman Empire. Milk thistle uses also extend all the way to traditional Chinese medicine and even Ayurveda. The most common milk thistle uses were to protect the liver and boost overall liver health. Modern research has backed up that milk thistle is indeed a healthy ingredient for our livers and we have been able to pinpoint the compounds in  milk thistle responsible for these effects. These compounds are: 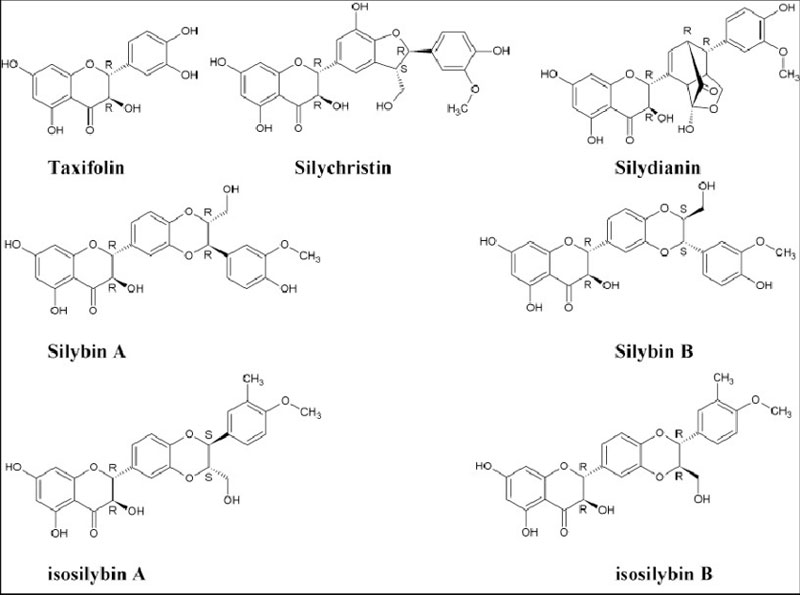 Chemical structure of the major constituents of silymarin.

These compounds are often collectively referred to as silymarin, and have a host of different effects. Through modern research, we have now been able to determine that milk thistle is not just good for our livers, but can even help protect our brains and auditory systems! Due to the many milk thistle benefits we decided to write up a list highlighting, in our opinion, the top 5 milk thistle benefits for health. 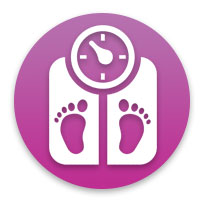 One of the most frequently asked questions we get is if we have anything that will produce weight loss. Unfortunately, the answer to this is always a ‘not really’, which is due to the fact that weight loss is highly multi-faceted and there aren’t really any compounds that can out-right make you lose weight. There are however a plethora of supplements that can help promote weight loss alongside a healthy diet and exercise regime. Milk thistle is one of these supplements, and milk thistle weight loss effects can be traced back to the silybin content. 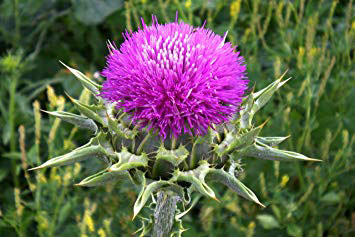 Milk thistle, again through silybin, is able to induce insulin induced gene 1 (INSIG 1) and insulin induced gene 2 (INSIG 2). By inducing INSIG 1 and INSIG 2, milk thistle is able to halt the differentiation of fat cells called adipocytes. Adipocytes are specialized in storing fat, and make up what we call ‘body fat’ which is also known as adipose tissue. By inhibiting the differentiation of adipocytes, milk thistle may help minimize body fat.

Overall, it appears that that the silybin contained in milk thistle, in particular, can be a great adjunct to a healthy diet and exercise regime. It will help enhance the effects that good diet and exercise will have on weight loss and overall health. For this reason alone, we consider milk thistle to be a highly beneficial health boosting supplement! 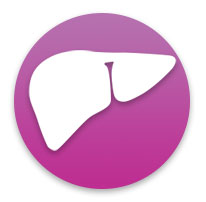 Most traditional milk thistle uses have been catered towards supporting liver health, which modern research has now been able to verify. Milk thistle liver detox benefits are plentiful, ranging from general protection of the liver to down right helping repair damaged livers. With this is mind, milk thistle is a great ingredient to take on a daily basis to keep our livers healthy, but is also good to take alongside substances which are not all too good for our livers, such as alcohol. 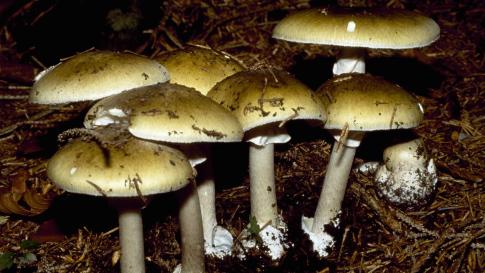 In terms of protection, milk thistle achieves this through a few different mechanisms. The first of which is to regulate toxins from entering and forming in our livers. There are many environmental toxins which get filtered through our livers and some of these toxins can be very damaging. An often-cited toxin which can very negatively affect our livers is phalloidin, from the death cap mushroom. Traditionally the only antidote to death cap mushroom poisoning has been milk thistle liver detox. This is due to the fact that milk thistle blocks the transport system that is responsible for shuttling phalloidin into liver cells. Of course, on a daily basis we are not exposed to death cap mushroom poisoning. That being said, milk thistle may also protect our livers from environmental toxins that are being metabolized by the liver.

One of the liver's main priorities is regulating toxins in our bodies. Doing this, however, requires a lot of work by our liver, and all of this workload results in the production of oxidative free radicals. This heightened state of oxidation in our livers is usually taken care of by our bodies own molecules such as glutathione. In situations where the oxidative load is too high for our body, our livers may become overwhelmed by oxidation. Milk thistle liver benefits include providing some extra help with clearing out oxidative free radicals in these situations by boosting various systems in our livers. Milk thistle may boost levels of one of the main molecules in our bodies, reduced glutathione (GSH), while also boosting catalase, glutathione reductase (GR), and glutathione peroxidase ( activities.

Reduced glutathione reductase, glutathione peroxidase and glutathione interact to reduce hydrogen peroxide to water, in order to protect the cell from oxidative damage.

Now, it may be the case that our livers have been working too hard already and have incurred some oxidative damage. In this case, milk thistle liver benefits may help the liver regenerate. It does this mainly by helping regenerate liver cells by increasing protein synthesis in the liver. The exact mechanism behind this regeneration is not exactly clear, however, research seems to indicate that silybin from milk thistle can stimulate RNA polymerase I activity. By stimulating RNA polymerase I activity, milk thistle can encourage the formation of ribosomes in the liver. These ribosomes, can then help stimulate protein synthesis in the liver, which may lead to regeneration of damaged liver cells. 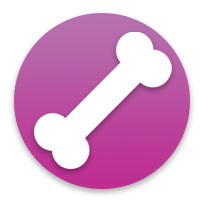 As we age, our bones can become weaker. This is an issue that especially affects women, which is due to the fact that bone density/bone strength is highly dependent on estrogenic systems. Silymarin from milk thistle appears to be able to modulate estrogenic activity in a manner that it highly beneficial for bone strength. This effect is not limited to women and applies to men too, as estrogen also plays an important role in the physiology of male bodies and their skeletal systems. That being said, the male body is much less reliant on estrogenic functioning, which is why weakening of bones tends to occur earlier in women than it does in men. 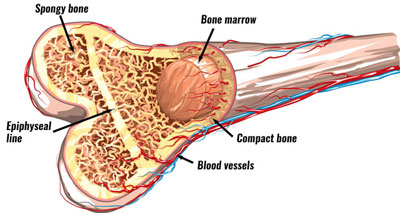 The Anatomy of a Bone 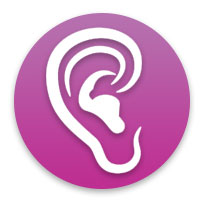 As you may have become accustomed to, we like to delve deep into research to find novel effects that some of our products may have. Something many of you however do not know is that a lot of us are also highly interested in music. In fact, we have a few professional musicians currently on the Nootropics Depot team! As many musicians know, hearing damage is often a very real concern as both a performer and as a listener. This is why we were especially excited when we discovered that milk thistle may help protect our hearing when we are exposed to loud sounds. 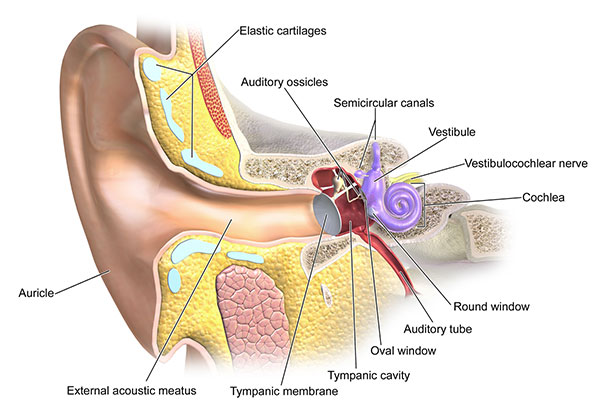 The Anatomy of the Human Ear 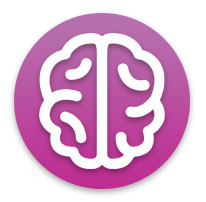 Just like our cochlear hair cells, our brain cells are also susceptible to oxidative damage induced by ROS. In fact, our brain has highly specialized anti-oxidant systems due to the active nature of our brains. Our brains are constantly producing ROS because of its high energy demand. Some of these ROS even originate from the neurotransmitters in our brain. For example, upon metabolism of dopamine, strong oxidative metabolites can be generated. Usually our brain has the proper defense mechanisms against these ROS. However, sometimes our brains need a little bit of extra help. Milk thistle, being a great oxidation regulating ingredient, can quite robustly protect the brain from ROS. However, there are many oxidation regulating ingredients that could exert a general neuroprotective effect. What makes milk thistle unique is that it can work on various different systems throughout the brain that are involved in keeping our brains healthy.

As we discussed earlier, dopamine metabolism produces large amount of strong oxidative compounds. Our dopamine neurons are well equipped to handle this oxidative stress. However, sometimes these defenses just aren’t enough. Milk thistle can both help neutralize ROS, and it can even help protect dopaminergic neurons in a more direct way. The silybin content of milk thistle may help directly stabilize the mitochondria of dopaminergic cells. Mitochondria are the power generators of our cells, and are easily affected by oxidation. By stabilizing these mitochondria, milk thistle has a very direct neuroprotective effect, which can help keep our dopaminergic system healthy.

Milk thistle may also help halt the production of inducible nitric oxide synthase (iNOS). Activation of iNOS causes a very large release of the gaseous neurotransmitter nitric oxide, which has a large variety of effects throughout the brain and body. Nitric oxide release around our blood vessels is often times highly desirable as it will increase blood flow. Nitric oxide boosting supplements, such as  L-Citrulline, are often utilized by athletes looking for more endurance. However, nitric oxide in the brain usually occurs alongside high amounts of oxidation. This can lead to the formation of peroxynitrite, a highly damaging oxidative compound. By halting the production of iNOS, milk thistle may be able to decrease peroxynitrite formation in the brain, which can produce a highly neuroprotective effect. Furthermore, nitric oxide is known to be an amplifier of inflammation in our brains. Thus, by halting iNOS production, milk thistle may help promote healthy inflammatory responses.

Another good strategy for protecting our brains is making sure our brain is able to adapt and change. The main process behind this adaption and change in our brains is called neuroplasticity. Neuroplasticity is dependent on a whole host of factors. However, of the main drivers behind neuroplasticity is brain derived neurotrophic factor (BDNF). We go into a lot of detail what BDNF is in  our blog on 7,8-DHF which we would recommend reading. The jist of it is that BDNF binds to the TrKb receptors, which then initiates a large signaling cascade which leads to growth, adaptation, and change in our brains. Neuroplasticity is a major neuroprotective mechanism in our brains, and reduced neuroplasticity can lead to a whole host of issues such as reduced cognitive function and reduced mood. Luckily, the silybin content from a milk thistle supplement is able to enhance neuroplasticity through the BDNF/TrKb pathway. By doing this, milk thistle may help enhance learning and memory, boost mood, and help support healthy inflammatory and oxidative responses. 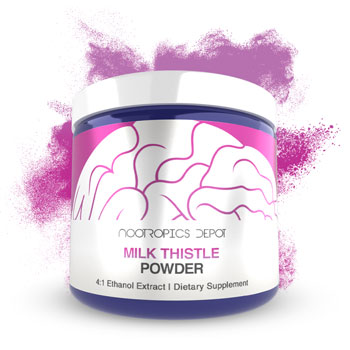 
The Best Supplements to Support Collagen Synthesis and Skin Health