Coenzyme Q10 (also known as CoQ10) is, as the name suggests, a coenzyme. CoQ10, via its action as a coenzyme, can drive many cellular processes throughout our bodies. Although not classified as a vitamin, CoQ10 closely resembles the structure of vitamin K and it appears that CoQ10 benefits resemble vitamin-like effects. This also hints at an important aspect of CoQ10: it is essential for overall human health. Without CoQ10, many bodily functions would may not work properly. Luckily our bodies are fairly good at preserving CoQ10, and CoQ10 deficiencies are rare. That said, taking a CoQ10 supplement still may have some remarkable effects on overall health.

Supplementing with extra Coenzyme Q10, alongside a healthy diet, may produce the following CoQ10 benefits:

A large majority of these CoQ10 benefits are attributed to how CoQ10 helps the body produce adenosine triphosphate (ATP), a very important molecule which drives most biological processes in the body. CoQ10 is also known as a redox molecule, which allows it to transfer between fully oxidized and fully reduced states. Through its redox actions, CoQ10 can help power our cells while also helping protect them from oxidative stress. This all sounds great on paper, right? However, CoQ10 in its crystalline form is faced with some major issues and may not be able to produce all of the CoQ10 benefits mentioned above.

The Problems with CoQ10 Absorption Bioavailability

As we just discussed, Coenzyme Q10 is a fantastic compound with lots of beneficial effects for both mind and body. That being said, CoQ10 benefits can only be realized if the CoQ10 is being properly absorbed and shuttled to where it is needed. This is where the poor water solubility of CoQ10 starts to become a major limiting factor. For compounds to be absorbed rapidly and efficiently, we want them to have a good ratio between water solubility (hydrophilicity) and water insolubility (hydrophobicity). This ratio is called the Log P, and is a good predictor of bioavailability. The more water soluble a compound is, the better it will get absorbed. However, absorption is also dependent on lipid bilayer permeation in cells. Due to this, you also want a compound to be slightly hydrophobic and lipophilic. The ratio between hydrophobicity and hydrophilicity is the Log P. If the Log P is under 5, then a compound has a good ratio between hydrophobicity and hydrophilicity, and due to this, has the potential to be very bioavailable. In fact, a Log P under 5 is one of the five rules that Christopher A. Lipinski, the medicinal chemist at Pfizer who set the standard for drug bioavailability, established to predict bioavailability of a compound. The Log P of CoQ10 is unfortunately 21, way above the ideal Log P of below 5! It also violates another one of Lipinski’s rule of 5, which stipulates that for ideal bioavailability, a compound should have a molecular weight of below 500 Daltons. CoQ10 has a molecular weight of 863 Daltons. So, unfortunately it doesn’t adhere to this rule either. 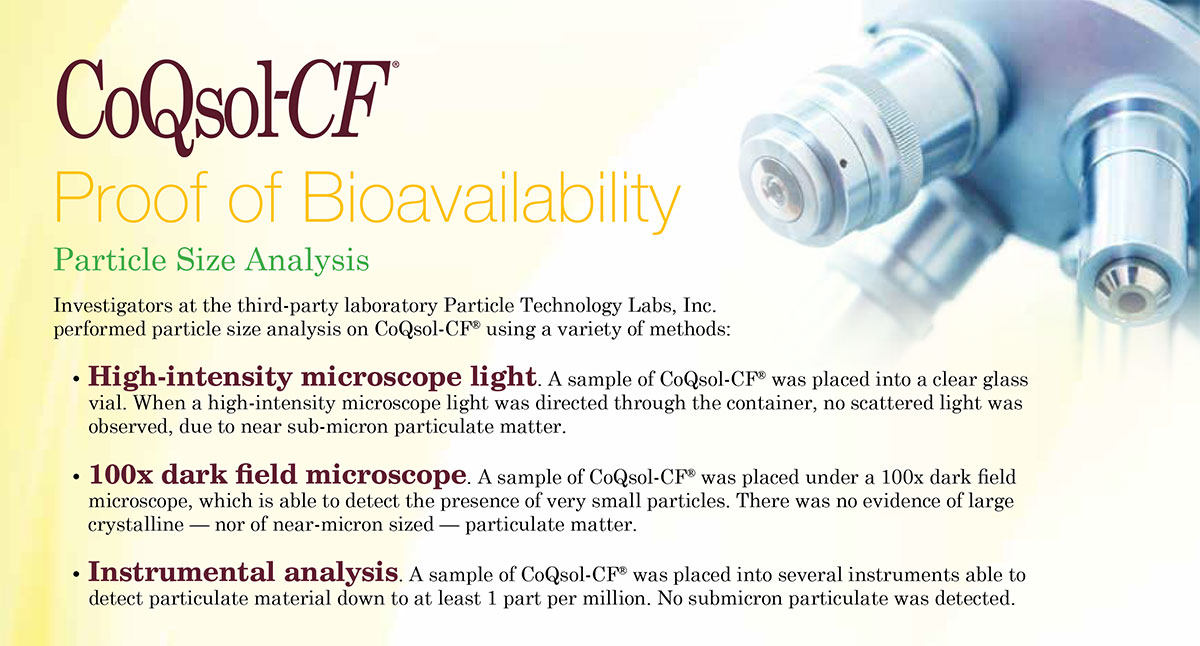 Based on this, plain old crystalline CoQ10 is not a great choice for supplementation, as it has at least two major factors limiting its bioavailability. This is very unfortunate as most CoQ10 supplements on the market are simply crystalline CoQ10 pressed into tablets or loaded into capsules. From the data on absorption mechanisms on CoQ10, it is highly unlikely that we can achieve adequate serum levels of CoQ10 by supplementing with crystalline CoQ10. This means that many regular off-the-shelf CoQ10 products like that ones found in your local grocery store will likely have a hard time truly producing the CoQ10 benefits that people take it for.

The Solution to CoQ10 Absorption Bioavailability

The solution to the problem outlined above is literally to put Coenzyme Q10 in a solution (no pun intended), which is exactly what Soft Gel Technologies achieved with their CoQsol-CF product. Soft Gel Technologies discovered that CoQ10 is highly soluble in an extract of oranges called D-limonene. D-limonene can completely solubilize CoQ10, and has a Log P value of 4.570 which is below the Lipinski prescribed value of 5! By dissolving CoQ10 in D-limonene, CoQ10 bioavailability is drastically increased. Another unique aspect of D-limonene is that it inhibits recrystallization of CoQ10, which ensures both potency and stability for long stretches of time. D-limonene is much more than just a solubilizing agent for CoQ10 though, as it even has some of its own unique benefits! D-limonene benefits include:

Overall, taking into account the above D-limonene benefits, D-limonene appears to be a very healthy compound! Read on to learn more about what makes CoQsol-CF CoQ10 Softgels the best CoQ10 supplement available.. 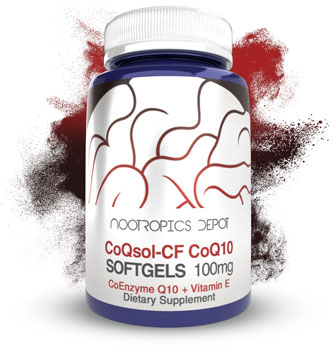 Not only is CoQsol-CF more bioavailable than most Coenzyme Q10 products on the market, it also features vitamin E for enhanced functioning of CoQ10 in the body. Vitamin E and CoQ10 appear to synergize together and can enhance each other’s effects in the body. At a dose of 100 IU vitamin E present in each CoQsol-CF capsule, you are getting 333% of your daily recommended intake of vitamin E! Vitamin E is important for our body and goes hand in hand with CoQ10 to help promote cardiovascular health. Vitamin E benefits are plentiful, much like D Limonene! Vitamin E benefits include: 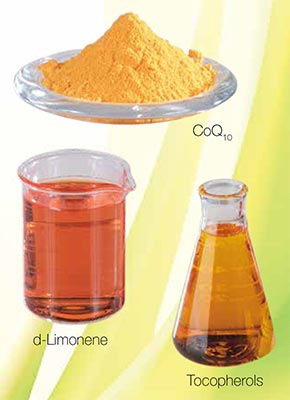 In order to fully realize these vitamin E benefits, CoQsol-CF utilizes a mixture of various tocopherols. The tocopherols included in CoQsol-CF are:

Coenzyme Q10 can occur in multiple different forms in the body, and the two most abundant forms are oxidized CoQ10 (ubiquinone) and reduced CoQ10 (ubiquinol). Many people tend to prefer ubiquinol, due to its oxidation reducing effects in the body. However, due to this, the lesser desired ubiquinone often times gets overlooked. This is a shame because it actually has some very unique effects! Ubiquinone plays a major role in the electron transport chain, acting as a shuttle for cellular energy. Due to the fact that ubiquinone CoQ10 is hydrophobic and lipophilic, it can freely move between hydrophobic regions in the inner membranes of mitochondrion. It moves by way of passive diffusion, so no energy is needed to move CoQ10 around in the mitochondrion. 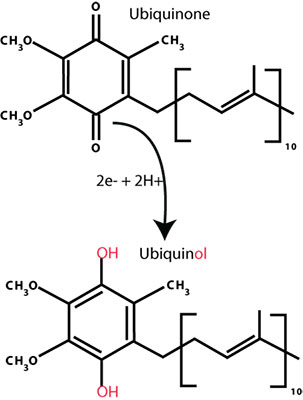 ATP is the primary source of energy for our cells, and nearly every biological process in our body is dependent on the availability of ATP. You can read more about the importance of ATP in our in-depth  creatine blog. Since CoQ10 is such an important component in ATP synthesis, deficiencies in CoQ10 can be majorly detrimental to various different functions within our bodies and brain. By supplementing with CoQ10, especially in the ubiquinone form, we can enhance ATP formation; which should translate to improved physical strength and enhanced cognition. To capitalize on the effects of CoQ10, it may be highly beneficial to take CoQ10 alongside creatine monohydrate. As can be read in the creatine monohydrate blog, creatine is another major regulator of ATP production, and it has been suggested that CoQ10 and  creatine synergize to produce large amounts of ATP.

Another good product to combine with CoQ10 is shilajit. Studies have shown that when CoQ10 and shilajit are supplemented together mitochondrial function is improved greater than with either one alone. Shilajit essentially improves the efficiency of the supplemented CoQ10. The combination of shilajit and CoQ10 has been shown to significantly elevate levels of ATP in the body. The reason for this is the fulvic acid and humic acids that are found in shilajit. Fulvic acid makes mitochondrial energy extraction more efficient, where humic acid speeds up the transfer of electrons along the electron transport chain. Put together, these mechanisms combine with the mitochondrial enhancing effects of CoQ10 to provide a very significant improvement to your body's entire energy transfer system. So combining CoQSol-Cf with our Primavie shilajit is a great combination that one should consider for energy and mitochondrial support.

What Does Ubiquinol Do?

As mentioned earlier, many people appear to prefer the fully reduced form of Coenzyme Q10, ubiquinol. Why is this the case? In the body, and especially in mitochondrion, ubiquinol benefits are focused on directly reducing oxidation. This is highly important in mitochondrion as their high activity results in large amounts of oxidative stress. By supplementing with ubiquinol CoQ10, it is possible to directly reduce oxidation in targeted areas such as the mitochondrion. These ubiquinol benefits make it highly attractive to consumers, and for good reason, as these oxidation reducing ubiquinol benefits are very desirable! That being said, you do not necessarily have to directly supplement with ubiquinol in order to utilize ubiquinol's benefits. This is due to the fact that ubiquinone actually turns into ubiquinol as it travels through the electron transport chain. In the electron transport chain, CoQ10 exists in three forms: ubiquinone, semiquinone and ubiquinol. Ubiquinone is the fully oxidized form, and when it picks up a proton, it turns into the partially reduced form, semiquinone. Semiquinone is a highly unstable compound which is quickly further reduced to ubiquinol by picking up another proton. Ubiquinol may then act in an oxidative support role in the mitochondria. However, when ubiquinol interacts with an oxidant, it becomes oxidized and loses a proton. This turns ubiquinol back into semiquinone. Semiquinone then also becomes oxidized and now we are back at the fully oxidized form of CoQ10: ubiquinone. This means that by either supplementing with ubiquinone or ubiquinol, you will reap similar benefits. That being said, supplementation of ubiquinone may act more rapidly to produce ATP whereas supplementation with ubiquinol may act more rapidly to control oxidative stress in the mitochondria.

Who Should Take a CoQ10 Supplement?